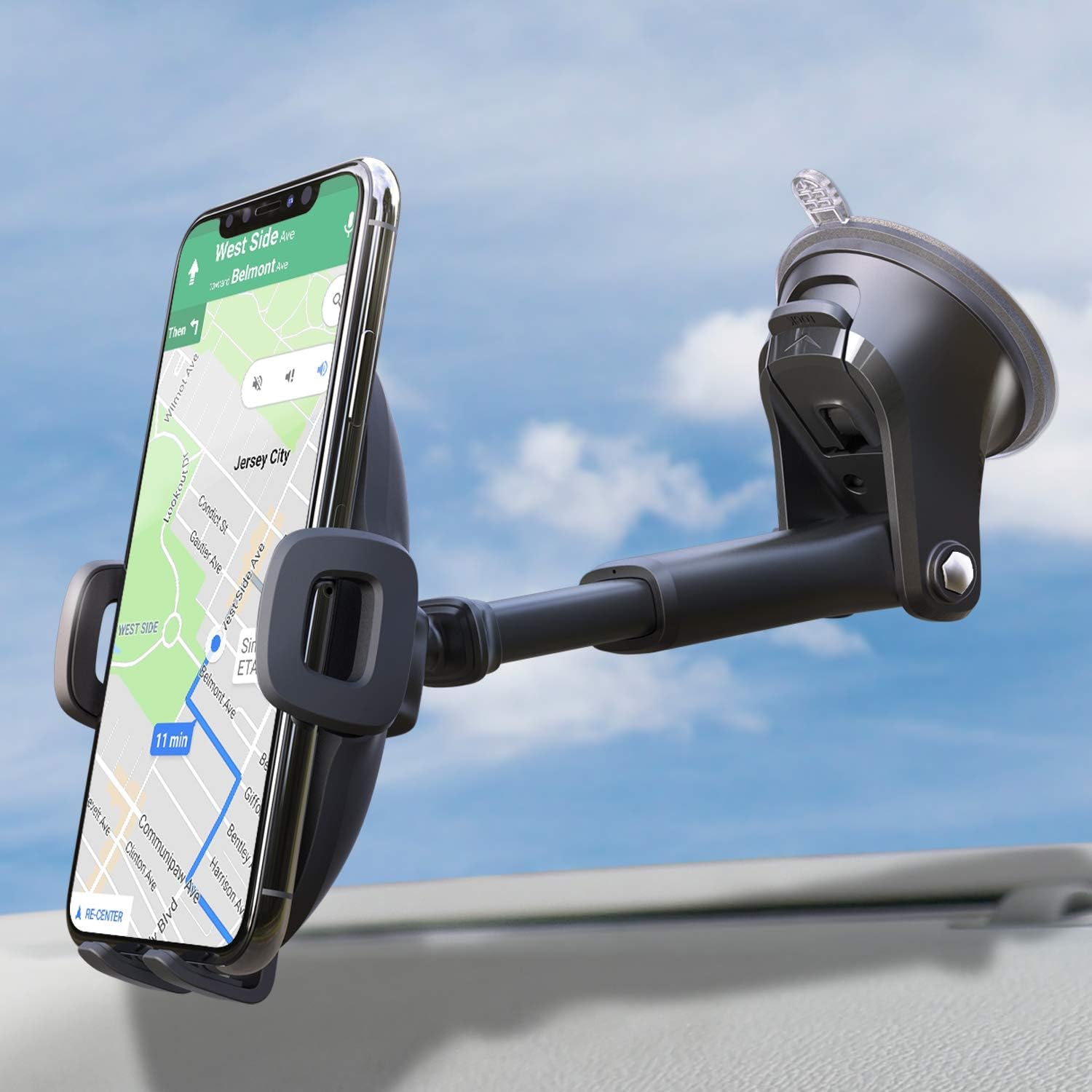 "li" Full Range of Motion: The cradle holder rotates 360Â°, enabling you to view your device in portrait or landscape orientation. The car phone mount holder has a pivoting and telescopic arm that helps you position your phone in the optimum position. You can pivot the arm up to a 240Â° arc, and extend the arm from 4.6" to 6.3". "li" Quick-release Button for Easy Phone Access: This hands-free Car Phone Mount with the One-click release button design, you can just press the button on the back of the holder to release the two sides grips, then snap device into place, your phone is good and secure. Easy to place and remove your smartphones with just one hand. "li" Reliable Strong Suction Cup Windshield/Dashboard Phone Holder for Car: The Suction Mount Phone Holder has a strong suction cup with Industrial-leading technology that adheres to most smooth surfaces, such as dashboards, windshields, countertops, desks, tables and other surfaces except leather, vinyl and soft surface. NOTE: Clean and dry the mounting surface with the cloth before installation.

Clean the mounting surface, ensure surface is free of all dust and dirt, then let dry completely.

The ball joint allows you clockwise and counter-clockwise rotation up to 360 degrees to adjust the display angle for the perfect view, provide the best viewing angle for you.

No more screw to adjusting, just pull and push to adjust the length. Easy one hand operated!

Industrial-strength suction cup with sticky gel and sticky disk pad, the car phone holder can be fixed firmly on the central console or windshield. Keep the cell phone holder stably on your car while driving, even on the bumpiest roads.

*The suction cup can be restored in good condition by simply rinsing under running water and air dry.

How to mounting your suction cup phone holder securly on your windshield/Dashborad?

Clean the mounting surface, ensure surface is free of all dust and dirt, then let dry completely.

Place car mount on the place, press the "Lock" button.

1,Place the car mount on the optimum position, press down the âLOCKâ lever.

2,Press the button on the back of the holder to release the two side grip, then place the device to the holder and squeeze the grip back together by just one hand.

-The suction cup may not compatible with the leather, vinyl and soft style surface. Recommend that to mount it on the windshield for stronger hold if your carâs dashboard surface is leather or vinyl or soft.

-The depth of the two sides arms are 14mm, it may not compatible with some thick phones or phones with a thick case.

How to keep drones flying when a motor fails

What can I do here? Learning new skills by imagining visual affordances

How do humans become so skillful? Well, initially we are not, but from infancy, we discover and practice increasingly complex skills through self-supervised play. But this play is not random – the child development literature suggests that infants use their prior experience to conduct directed exploration of affordances like movability, suckability, graspability, and digestibility through interaction and sensory feedback. This type of affordance directed exploration allows infants to learn both what can be done in a given environment and how to do it. Can we instantiate an analogous strategy in a robotic learning system?

Sinergies between automation and robotics

In this IEEE ICRA 2021 Plenary Panel organised by the Ad Hoc Committee to Explore Synergies in Automation and Robotics (CESAR), and aimed at the younger generation of roboticists and automation experts, panelists discussed about the substantial overlap in topics and research communities of both disciplines, and how to bring such communities closer.

Surgeons to reach prostate with robot

A student team in RoboHouse has invented a robot that may enable more precise treatment of prostate cancer. The team collaborated with Martijn de Vries, a PhD researcher at TU Delft specialised in developing minimally invasive instruments for tumor treatment.

Lilly interviews Chris Lee, a graduate student at Oregon State University. Lee explains his research on marsupial robots, or carrier-passenger pairs of heterogeneous robot systems. They discuss the possible applications of marsupial robots including the DARPA Subterranean Competition, and some of the technical challenges including optimal deployment formulated as a stochastic assignment problem.

Apart from the IEEE/RSJ IROS 2020 (International Conference on Intelligent Robots and Systems) original series Real Roboticist that we have been featuring in the last weeks, another series of three videos was produced together with Black in Robotics and the support of Toyota Research Institute. In this series, black roboticists give their personal examples of why diversity matters in robotics, showcase their research and explain what made them build a career in robotics.

Should a home robot follow what the mom says? Recap of what happened at RO-MAN Roboethics Competition

On August 8th, 2021, a team of four graduate students from the University of Toronto presented their ethical design in the world’s first ever roboethics competition, the RO-MAN 2021 Roboethics to Design & Development Competition. During the competition, design teams tackled a challenging yet relatable scenario—introducing a robot helper to the household. The students’ solution, entitled ”Jeeves, the Ethically Designed Interface (JEDI)”, demonstrated how home robots can act safely and according to social and cultural norms. Judges from around the world, with diverse backgrounds ranging from industry professionals to lawyers and professors in ethics, gave their feedback on the team’s submission. Open Roboethics Institute also hosted an online opinion poll to hear what the general public thinks about the solution for this challenge.

This week you’ll be able to listen to the talks of Jonathan Hurst (Professor of Robotics at Oregon State University, and Chief Technology Officer at Agility Robotics) and Andrea Thomaz (Associate Professor of Robotics at the University of Texas at Austin, and CEO of Diligent Robotics) as part of this series that brings you the plenary and keynote talks from the IEEE/RSJ IROS2020 (International Conference on Intelligent Robots and Systems). Jonathan’s talk is in the topic of humanoids, while Andrea’s is about human-robot interaction.

When humans play in competition with a humanoid robot, they delay their decisions when the robot looks at them

Gaze is an extremely powerful and important signal during human-human communication and interaction, conveying intentions and informing about other’s decisions. What happens when a robot and a human interact looking at each other? Researchers at IIT-Istituto Italiano di Tecnologia (Italian Institute of Technology) investigated whether a humanoid robot’s gaze influences the way people reason in a social decision-making context. What they found is that a mutual gaze with a robot affects human neural activity, influencing decision-making processes, in particular delaying them. Thus, a robot gaze brings humans to perceive it as a social signal. These findings have strong implications for contexts where humanoids may find applications such as co-workers, clinical support or domestic assistants.

We’re reaching the end of this focus series on IEEE/RSJ IROS 2020 (International Conference on Intelligent Robots and Systems) original series Real Roboticist. This week you’ll meet Michelle Johnson, Associate Professor of Physical Medicine and Rehabilitation at the University of Pennsylvania.

When mud is our greatest teacher

In February we asked ‘How can robotics help Rob, the gas leak detector?’, when announcing our collaboration with Alliander about cognitive robotics and worker wellbeing. Today, we are able to share some tentative insights.

As part of our series showcasing the plenary and keynote talks from the IEEE/RSJ IROS2020 (International Conference on Intelligent Robots and Systems), this week we bring you Nikolaus Correll (Associate Professor at the University of Colorado at Boulder) and Cynthia Breazeal (Professor of Media Arts and Sciences at MIT). Nikolaus’ talk is on the topic of robot manipulation, while Cynthia’s talk is about the topic of social robots.

What is the future of Agri-Food Robotics in the EU and beyond?

During the last decades robots are transforming from simple machines to cognitive collaborators. The distance that has been covered is long, but there are still challenges, as well as opportunities that lie ahead. That was also the main topic of discussion in the agROBOfood event ‘Visioning the future of agri-food robotics’ by a panel of experts of the domain.

In this fourth release of our series dedicated to IEEE/RSJ IROS 2020 (International Conference on Intelligent Robots and Systems) original series Real Roboticist, we bring you Peter Corke. He is a Distinguished Professor of Robotic Vision at Queensland University of Technology, Director of the QUT Centre for Robotics, and Director of the ARC Centre of Excellence for Robotic Vision.

The IEEE Robotics and Automation Society has recently released the list of winners of their best paper awards. Below you can see the list and access the publications. Congratulations to all winners!